The Spanish and French students of TSRS Moulsari bagged the winners trophy in the Inter-school Spanish and French Extravaganza- ‘Romance’ held at International School Aamby (ISA) on 16th and 17th Jan 2016.
In this multicultural festival our students showcased not only their enhanced language skills but also cultural knowledge of the various Spanish and French speaking countries.
Along with taking part in the competition with zeal and vigour, the students also sang and danced and immersed themselves in the festivities of the extravaganza. They were exposed to the cultural and lingual brilliance of France and Spain and held up the school’s value of pursuing excellence as they bagged prizes in almost every event. 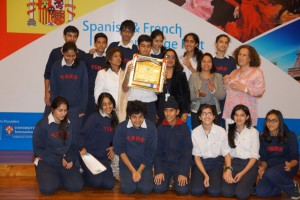 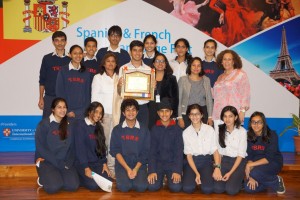 Here is what our students have to say about their experience:
Romance was an exciting experience, one of its kind,that I have never seen before. It was an interesting proposition and very well executed with a wide variety of events that challenged the participants. I really enjoyed the competition, as a foreign language competition is not something I’d ever thought I’d be participating. It was an honour to participate and I’d love to go back next year.
Kedar Satyanand(IB-2)

From the ﬂight to reaching this city,
time has ﬂown in a jiffy!
My Spanish skills were put to test,
in this well-organised ‘Romance’ fest!
I would like to thank the school for giving me,
this amazing opportunity
I learnt many new things which I didn’t know,
And would like to say- “ Me Gusta Mucho! ”

A few lines written by some of the French participants at International School of Aamby:
I really enjoyed my time at ISA. It was my first experience representing school for French. The school is located in the beautiful city of Aamby. The competitions I took part in were Quizzomania and Tongue Twisters. It was amazing.
Nitish Sahni, 9B

‘Teq It Out’ Issue 2 :: The official newsletter covering ShriTeq 2016

At The Shri Ram School's, Moulsari campus, the growing adolescents are encouraged to explore their abilities and talents and stretch their horizons.

At the Shri Ram School's Aravali campus you walk into the bright, airy, cheerful classrooms of the junior and the senior wings, greeted by art and craft work of the children and teachers.